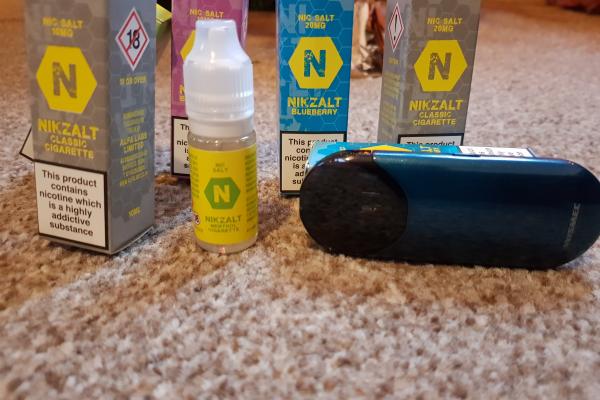 So, Nic Salts. As a trend, they've taken over a lot of the vaping community already. As starter kits are currently rapidly becoming much more pod oriented, it's not uncommon to see nic salts around and being used. It's a pretty great way to try and quit smoking, and so we're going to be taking a look at what nic salts are and how they can help you.

So, What are Nic Salts?

Nicotine salts are considered to be the same form of nicotine as is found in regular cigarettes. A pretty common misconception that people have is that the nicotine is supposed to be the most dangerous part of smoking, but this is just isn't true. What's most dangerous about conventional cigarettes is tobacco, which contains a lot of harmful chemicals and substances.

Nic Salts are a different kind of thing altogether based on this original theory. The salts are the natural state of nicotine - this is the raw product which is turned into e-liquids when mixed with other things. What makes nic salts such a good idea is that they're a more natural substance than e-liquids, which makes it easier for the body to absorb them into the bloodstream which means the effects are felt more quickly.

How do They Differ From Normal E-Liquids?

Nic Salts are different from other e-liquids because they are a less distilled form of nicotine. Because this is a much stronger concentration, it provides a more immediate feeling than traditional e-liquids do. With just that information, you can begin to understand why people might prefer it to the regular e-liquid, which can be more cumbersome and awkward to try and keep a habit going.  Most users report Nic Salt e-liquids to be smoother with less thoat hit, which means they can be used in wider variety of devices without having to lower the nicotine content.

Nic Salts are considered to be a much more intense way to get the nicotine you need without having to compromise on your vaping experience. It's good for people who want to kick smoking to the curb because the journey can be challenging at first. Sometimes you need an aid to help you on the way. It's not a sign of weakness, but instead a natural part of overcoming an addiction.

In addition to being a useful tool in stopping smoking, Nic Salts are also a more cost-effective way of keeping a nicotine habit going. You see, they're a much cheaper accessory, but also can be used in a variety of different places. This versatility makes them a highly prized commodity.

Nic Salts are the newest way of using e-cigarettes, and upon reflection, you can clearly see why they're such a valuable option. Having a healthier alternative to regular cigarettes makes quitting smoking a much easier process, and even if you don't transition from them, there's potential to enjoy them. It's much more pure and potent than e-liquids, which can make it desirable for people who want to experiment with a different kind of vaping experience. Nic Salts are a prevalent method of nicotine delivery and one which will continue to grow and develop as more people come to experience them and appreciate their benefits.


Check out our exciting new collection of Nic Salts.